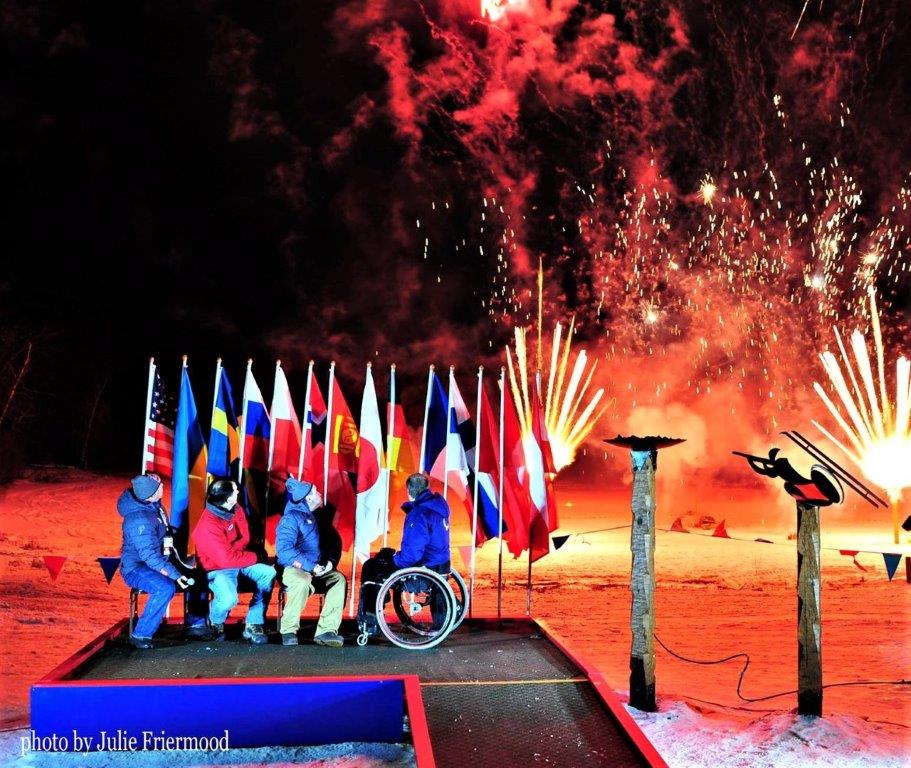 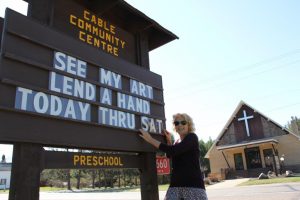 The 10-year anniversary of SMART/See My Art, Inc. is the perfect time to share a story and accompanying photo illustrations of our organization’s mission in action. SMART facilitated collaboration among LCO/Lac Courte Oreilles women artists, community volunteers, SMARTists and Paralympians to create powerful pieces throughout the 2-week 2015 Paralympic World Championships. Artists, athletes and community members alike benefited from immersing themselves in this impactful project which resulted in positive and lasting individual, regional and global impact. 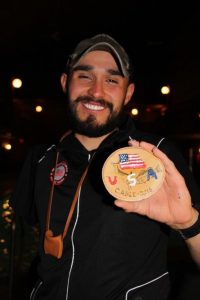 Lakewoods Resort in Cable was the site of the Paralympic World Championships for two weeks in the Winter of 2015. Paralympians enjoyed daily schedule of physical competitions and opportunities for engaging in artistic expression coordinated and facilitated by SMART, Inc., under the direction of Founder Sara Balbin. She had the foresight to envision a collaboration between competing adaptive athletes from fifteen countries, the Ojibwe Nation, community artists and local volunteers as “an opportunity for healing; to engage SMART in something cultural, educational and therapeutic to the Paralympians.” Sara began coordinating with and responding to the requests of the governing bodies of the Paralympic Committee, LCO Board and Cable Chamber of Commerce over a year before the events would take place at Lakewoods to fully realize her vision. She acknowledges that she took a “personal leap of faith” and was encouraged by community financial and in-kind support. The project was funded primarily by the Lac Courte Oreilles Nation, which donated $10,000 to provide materials for the assorted artistic products inspired by and created in the style of Indigenous pieces.

Participants engaged in a number of individual and group art processes throughout the Paralympic competition period. The SMART workshop was open from 8:00am to 8:00pm daily, situated next to the Lakewoods pool for prime accessibility to athletes and artists alike. Lac Courte Oreilles women artists facilitated the creation of Dream Catchers, and are even credited with spurring athletes on to victory. The following story illustrates the power of belief and participation in ancestral tradition as well as therapeutic arts for positive outcomes: 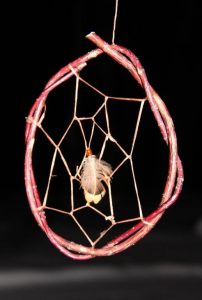 The French team had been on a losing streak in their events and entered the SMART workshop area with their heads hung low. The LCO artists reached out to provide counsel regarding letting the past losses go and instructed the athletes in the making of Dream Catchers to ward off evil spirits and allow positive dreams (and goals) to enter the receivers’ rooms while they were sleeping. (The women cautioned that it is critical to hang the hoops in front of windows, not walls, so that negative forces can escape and favorable dreams can penetrate.) The team entered their next competition with high hopes and convictions, motivated and inspired by their SMART session, and proceeded to win! One can draw their own conclusions about this victory; however, the athletes were certain that the Dream Catchers and LCO artist support in combination with their individual skills brought the win home for their team and country.

All Paralympians received Dream Catchers and deer hide medicine bags with Lake Superior agates to wear as necklaces to inspire good luck, drawing from more Native tradition. They also were gifted birch rounds to decorate during their artist workshop sessions. The culminating activity was the painting of large-scale doors with striking Native images of Ojibwe Clan Animals, which local Ventures, Unlimited participants began in the Summer of 2015 as preparation for this event and Paralympians finished onsite at Lakewoods during the Championships, with SMART staff/volunteers as their guides. One door was proudly displayed at the Cable Historical Museum, having been signed by all the Paralympians and their Coaches.

Sara Balbin appreciates and insists that this project would never have been realized without organization and community involvement. She states, “You can’t do really great things like this without the support of a dedicated Board of Directors.” 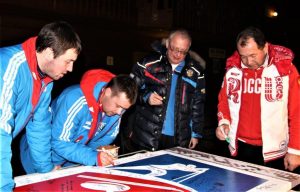 SMART Board member Kristi Dietz agrees, having volunteered onsite during the event. She was amazed by both the unity and diversity highlighted throughout the competition and workshop sessions; the athletes had different adaptive challenges and spoke different languages, yet came together to produce powerful sports accomplishments as well as impactful artworks. She remarks that it was “humbling and rewarding to work with such respectful, amazing athletes” and that the competition at Telemark was “like the Wide World of Sports,” highlighting the high level of trust adaptive athletes put in their guides (in the cases of blind skiers) during grueling races.

SMART also expresses gratitude for the numerous community members who stepped up to provide necessary resources and services. In particular, we wish to acknowledge Lakewoods Resort owners Kathy and Philip Rasmussen, who prepared and reserved a beautiful workshop space for SMARTwork throughout the competition period. In addition, The Lac Courte Oreilles Girls Club made small Dream Catchers and medicine pouches as parting gifts for the athletes. These and many more community contributions proved invaluable to the success of a project with so many moving pieces.

SMART/See My Art anticipates continuing our mission of opening doors and minds while promoting and facilitating arts engagement for people of all abilities in the Northwoods region as we celebrate our 10 year anniversary in 2022. We also wish the Paralympians of all nations an inspiring and successful Summer Games in 2024!

My Cart
Art on Display

Art is on display and for sale at the following businesses: